The following essay, about preparing for school visits, appeared in our SCBWI region’s quarterly newsletter, but I thought I’d share it here as well:

Looking for a Way to Prepare for Classroom Visits? Improvise!

When my kids sang in front of 500 people at an elementary school concert, my first thought (after some justified kvelling) was: “I can’t do that.” It’s not just that I can’t sing. It’s that the idea of getting up in front of a large group of people in any capacity makes my spine turn to ice, my legs to green Jell-O. Small groups? Sure. I’ve taught college classes and stared into the bored faces of 24 sports management majors at once. But beyond 24? No way.

With my first books coming out in the fall, I thought about sticking a clause in my school visit synopsis: Author is chicken and will not speak in front of more than two dozen people, regardless of height. While that’s not completely off the table, I decided it might be better to adopt a different strategy; I decided to try to get over it. I started researching options: Toastmasters; Public Speaking for the Business Executive; Ten Ways to Conquer Your Fears of Public Speaking. Then, thanks to friends, including Sara Lewis Holmes, who has this subject streaming through OPERATION YES, her middle-grade novel, it hit me: Improv. Cue the light bulb and the Hallelujah chorus.

I found a class at The Comedy Spot, which is about a mile from my home in Arlington, Va. It had a big stage, a leaky roof, and a loud HVAC system. It was perfect. The class, which lasted nine weeks, focused on scene work, building characters, and thinking on your feet. Sound familiar? It was a new way of attacking what I do every day and as a bonus, I laughed so hard that on Monday nights, I went to sleep with aching cheeks.

We started by learning to speak gibberish and tossing an imaginary ball. Then we played the games that instructor Rachel Garmon plays with her professional improv crew for weekend shows. Example: Garmon gave us each a word, say “blender” or “paperclip.” Our job: Develop a character inspired by that word and give advice to the unemployed and lovelorn. Or maybe Garmon would give us a location, say “Antarctica.” We’d develop a set-up scene, then re-enact it as romantic comedy, tragedy or Kung Fu movie. Or we’d get a fairy tale, and perform it in 90 seconds, then 30, and then 7. 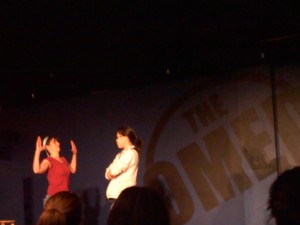 Snow White captured by my husband's old Android. I'm on the left as the Magic Mirror, telling the wicked queen she isn't all that.

We created machines that relied on sound and motion. We honed puns and groaned loudly. When we made mistakes, we bowed to wild applause. “I honestly believe there are no mistakes in improv except the mistake of not taking a risk,” says Garmon, who’s been doing improv for seven years. Her message? If you try something, own it. Be ridiculous. Be funny. Be fun. “For obvious reasons, it can help you get over stage fright,” Garmon says. “You have to be aware of what everyone else is doing while maintaining focus on the end product. You’re always analyzing and reacting. Improv also helps you find your natural voice. Through the characters you play, you find yourself.” (For the record, I found myself through a killer jackrabbit, Justin Bieber, and a hygiene-obsessed, post-menopausal woman named Gertrude.)

That Monday night class marked the most fun I’ve ever had with a group of strangers, although my classmates— bankruptcy lawyers and diplomats and baristas and chemistry teachers—aren’t strangers anymore. In many ways, I came to feel about them the way I feel about the people in my kid-lit critique group. I think that’s what happens when you make yourself vulnerable in front of other people—when you put yourself out there, and share laughter and blind trust.

For our final class, we put on a performance that was open to the public. The club didn’t hold 500 people, so I’m still not as brave as my kids. But I passed my 24-person threshold. And I survived. I’ll admit that I was nervous in the green room. I was still nervous when I stepped onto the stage. But I learned that it’s not nearly as nerve wracking when someone else shares the stage with you. So in the future, when I do school visits or book festivals, I’ll be sure to ask some volunteers to come up and keep me company.

Madelyn Rosenberg is the author of A SCHMUTZY SABBATH (Holiday House) and HAPPY BIRTHDAY, TREE: A TU B’SHEVAT STORY (Albert Whitman), which will both be released this fall.