When it comes to words, Wendy Wan-Long Shang is patient. Sometimes the words rush right at her without pausing for breath. But they also walk. They amble. They bend down to pick a blade of grass.

Wendy waits for the right words. For the right story. For the right book. For those of us who wait for Wendy’s words not-so-patiently (aka: me), I am happy to say that the book in question — The Way Home Looks Now (Scholastic) — is in stores today.

Home follows Peter Lee and his family as they navigate the aftermath of his brother’s death and the life that follows for all of them, played out against the backdrop of a game they all love. There’s grief, humor and warmth here. There is love and friendship. And there is baseball.

Me: Talk a little about what inspired this story.

Wendy: My father coached my older brother’s baseball team in the early 1970s, and during that time, my father had to handle a pretty hot situation on the team. His feelings on the issue and the way he handled the problem made an impression on me, and I wanted to write about it. When I started researching that time period, I realized what a rich period it was for Chinese-Americans and baseball. Taiwan was starting its era of domination in the Little League World Series around that time, and the team was an enormous source of pride for people like my parents, who had grown up in Taiwan and then moved to the U.S. I started developing a story that could incorporate these ideas.

Me: This story also deals with managing grief. Do you think people know how to deal with grief – their own or other people’s? 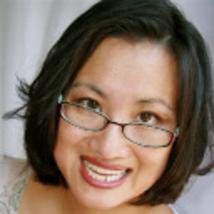 Wendy: It’s very interesting, because you and I both come from backgrounds where the grieving process is very prescribed. Judaism has shiva, and in China, there are a lot of customs regarding how to honor the dead. In America, there’s no agreed-upon set of rules and customs.

I think the hardest stage of grief is after the rawest phase is over, after the funeral is over and the casseroles stop coming, both for the one who grieves and those around him or her. It’s hard to know what is ‘right’ to feel or, for others, what to say or how to help. That’s around the time we find Peter, trying to negotiate his own feelings while seeing many different examples of how people grieve around him.

Me: Let’s talk a little bit about your writing process – how long it takes you, where you get in the weeds and how you get out again?

Wendy: Oh, I’m such a slow writer. I seem to take about two years to write a book. I usually have a sense of what my character’s internal journey is going to be, but I have a hard time keeping the outward journey on pace and interesting. I try to think of the problem technically – X needs to happen in this chapter so that Y will result – and then I keep an eye out for situations that fit that criteria. Isn’t that romantic?

Me: Your kids have had you pretty much entrenched in baseball for the last decade. And rugby. And karate… But I seem to remember your saying that you yourself were not a sports kid? Both The Great Wall of Lucy Wu and Home are set against a backdrop of sports. Was this coincidence or was there a master plan?

Wendy: Heh heh – no master plan. I played exactly one season of baseball as a kid, but as a writer, I think sports gives us the ability to explore lots of themes – including how we perceive ourselves vs. how others perceive us.

Me: When we were in high school, we had softball teams but the only sports you ever heard girls talk about then were gymnastics and track. How much do you think has changed?

Wendy: Oh my gosh, SO much has changed with regards to women and sports. I remember when the first women sportscasters were coming up, and it was such a big deal.  It seemed incomprehensible to some people – how could women be interested in sports? Now we have so many more opportunities and great programs like Girls on the Run. The door has opened, though it needs to get much wider.

Me: As much as it pains me to call something from my lifetime historical fiction, that’s what this book is. Could you talk a little about your research?

Wendy: I did a little bit of everything. I talked to my parents and my brother, of course. My family took a summer road trip through Pennsylvania and we stopped by the Little League Museum in Williamsport, and I used that opportunity to get a lot more detail about the players and the game that I describe in the book. Newspaper archives were also a wonderful source of finding those smaller-than-front page tidbits that give you a sense of the times.

My biggest regret is not finding the photograph of my brother’s team that my dad coached, and the letter that my dad wrote to the team.

(Ed. Note: TOTAL LONGSHOT, but if you happen to be reading this AND you played on a team coached by Jer-Yu Shang AND you were once a notorious scrap-booker and have such items, we’d love to hear from you.)

Me: Did you unearth anything interesting that you couldn’t include in the book?

Wendy: While I was at the Little League Museum, I found lots of interesting information about the first Little League team from Taiwan to win the series. They had a news clipping about how the local Chinese restaurant in Williamsport kept the team supplied with Chinese food, and every team has a local host to take care of them. That’s a story in itself.

Me: Talk a little about what you, personally, remember from Taiwan winning those world series.

Wendy: What I remember is that my family, who did not truck in spectator sports of any kind, would stop and watch the series on TV if Taiwan was playing. That action alone made a pretty big impression. My parents and my brother went to the actual games before I was born – they would ride on buses chartered by groups of Chinese families from Delaware.

Me: In Lucy Wu, we were all about dumplings. Here, we have lemon cake and shrimp chips. How important is food when you’re creating a setting or landscape?

Wendy: I like knowing what my characters are eating – I can tell you from my children’s behavior that food can play a huge role in mood and whether or not you’re having a good day. In HOME, food represents memory and longing.

Me: What do you think Peter would have thought of Mo’Ne Davis?

Wendy: Mo’Ne Davis was the first girl to throw a no-hitter in the Little League World Series last summer. Peter would have thought she was terrific and perhaps a bit intimidating.

Wendy: I’m trying to grow as a writer, so I am experimenting with stories that use a different POV and voice, as well as, yikes, poetry. Wish me luck!

We do!! If you want to learn more about Wendy, visit her online at wendyshang.com. You can also follow her on twitter at @wendyshang, though trying to spot one of her tweets is like trying to spot a ruby-throated hummingbird . A fantastic review is here, at the Nerdy Book Club site. And A.B. Westrick talks craft with Wendy right here on her blog.