I first met Hena Khan five years ago at an event we did for an organization called JAM DC. (The JAM is for Jews and Muslims.) At the time, I had just released The Schmutzy Family and Hena had just released Golden Domes and Silver Lanterns: A Muslim Book of Colors. There were parallels in why we wrote the things we wrote: trying to give our respective kids the books we wished we had growing up, and trying to give other kids an entry point into understanding the traditions that were important to us. 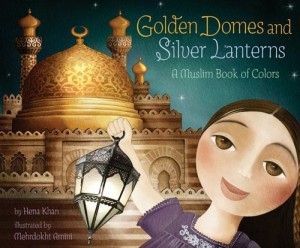 Hena is also the author of It’s Ramadan, Curious George, Night of the Moon, and a slew of nonfiction books. Her newest book, a middle-grade novel, is called Amina’s Voice, and it’s the first on Simon and Schuster’s Salaam Reads imprint. The book follows Amina Khokar, a Pakastani-American girl trying to balance fitting in and maintaining her family’s culture, in a world where some people are not always accepting of that culture — and they show it. She is finding her voice — and herself. In this blog post, Khan addresses some of her own feelings about writing a book that has become even more relevant in recent months, with a rise in Islamophobia, with acts of vandalism against mosques, and with a proposed travel ban on predominantly Muslim countries constantly in the news cycle. (To many stories to even link to here.) 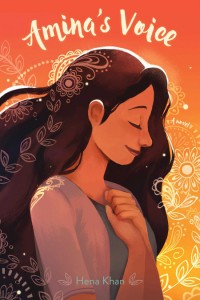 The middle-grade novel is a jump in genre from Hena’s recent picture books, just as her fiction was a jump from her non fiction. Still there are things about each genre that inform each other. So today, I thought I’d celebrate Hena’s new book by asking her some of my questions for genre jumpers.

Me: What was the first thing you ever published? And yes, I mean ever!

Hena: Other than my self-published family newspaper in elementary school, my first official publication and kids’ book was “The Spy’s Guide to Escape and Evasion” which was part of a Scholastic Book Club series (where kids receive a book and kit every month in the mail).

Me: As a professional writer, which came first for you: Chicken or egg, picture book or novel, fiction or nonfiction?

Hena: I worked on a bunch of series for Scholastic that were nonfiction, including Spy University, Space University, and How To Survive Anything. And then I went on to fiction. 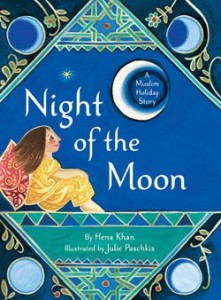 Hena: In 2008, I published my first picture book, Night of the Moon: A Muslim Holiday Story with Chronicle Books. And then I went on to write a couple middle-grade choose-your-own-adventure style novels with Chronicle. My latest, Amina’s Voice, a middle grade novel that is realistic fiction, just came out on March 14 with Salaam Reads.

Me: How has it been, having Amina out there?
Hena:  I’ve been so moved by the outpouring of love and support that it is getting. It is so heartwarming to get photos of kids with the book, read lovely reviews, and to hear the reactions to it. It makes it all feel very special, and it’s a huge relief to see that readers are connecting with Amina and her story in a way I had hoped for! 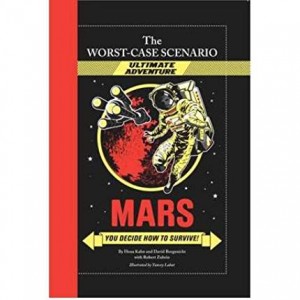 Me: As a kid, I always loved choose-your own adventure books. Could you talk a little about writing those?
Hena: I loved choose-your-own-adventure books too, and I had a few copies of my own that I reread like crazy. My favorite was The Abominable Snowman. The only weird thing about those books was how they would switch from realistic fiction to fantasy all of a sudden, and the endings felt arbitrary. In my books, the choices are mission-driven, and in order to reach ultimate success you have to make good choices. There’s a guide in the back with resources and clues. It was crazy trying to put together an outline with all the alternate endings, and it felt like working on a giant puzzle.
Me: Are you a one-project-at-a-time person, or do you mix it up?

Hena: I’m mostly a one-project-at-a-time person, but occasionally I will mix it up. I have worked on a longer narrative and a picture book at the same time. But I like to focus on one thing and think about it and sit with it for a while.

Hena: Yes, I tend to focus on stories and themes that focus on American Muslims.

Me: What has writing in one format taught you about the other?

Hena: Writing picture books has taught me how one word can throw off an entire manuscript, 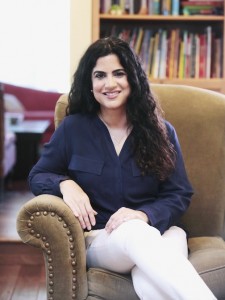 and made me be more careful when writing a novel or chapter book, and pay attention to every word.

Me: Is there anything that surprised you when you switched forms?

Hena: I think the challenge of nailing down the voice in a middle grade novel is something that surprised me the first time. It’s a lot different than writing a picture book!

Me: Is there a genre you’d like to try that you haven’t tried yet?

Hena: Yes, I’m working on my first chapter book series for Salaam Reads now, which has been a lot of fun. And I’m looking forward to writing my first young adult novel soon!

Thanks, Henna! You can find out more about Hena by visiting her website at henakhan.com.

You can also check out her recent interview with Mr. Schu Reads and you can read an excerpt here.

This entry was posted in author interview, genre jumpers, writing. Bookmark the permalink.