Reading guide for Not Your All-American Girl

As we talk with students about Not Your All-American Girl, we decided to put together a reading guide. Make sure you check out the activities at the end! We hope this will help readers connect with the book — and with some of the things that are going on in their own lives.A PDF is here: madwenreadingguide 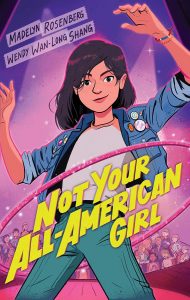 ABOUT NOT YOUR ALL-AMERICAN GIRL

Lauren Horowitz has an awesome tryout for the school musical. But when the part goes to her best friend Tara, who did not sing as well but looks like the teacher’s idea of an All-American girl, Lauren, who is Jewish and Chinese American, must examine her own expectations and beliefs about herself to discover what it truly means to be “all-American.”

Learn about the time period when this story takes place (1984) and the cultures involved. Find magazines, newspapers and other materials at that time to show what was in the news. Look at who was represented in TV shows and advertisements; how often were people of color the main character in a movie or ad?.

Your parents and guardians don’t think of the 1980s as history, but in fact, it is history. Even today will be history tomorrow. Ask the people around you how life was different then. How did people communicate? What were people worried about? How did they get their information? What did they do for fun? What kind of music represents the 1980s to them?

Now compare that with today. How do you communicate? What do you worry about?

Many middle grade stories are about friendships. How do friends treat each other? How important is listening in a friendship? Make a list of the things you appreciate about your friends.

What assumptions do you think other people have made about you or someone else because of race, religion, gender — or even your height? Were these assumptions correct or incorrect? How have you responded? The authors of this story often say that they could never think of what to do in moments when they faced prejudice, but that this story is their second chance at that.

Bias: A preference for or against an idea or person, without an opportunity to consider other ideas.

Diversity: The practice or state of including people of different races, social backgrounds, ages, genders, sexual orientations or other identities.

Inclusion: The practice of involving, valuing and respecting others, particularly people who might normally be excluded or marginalized.

Microagression: A microaggression is any kind of slight, snub or insult, whether it is made intentionally or not, which communicates negative or hurtful messages to a person based solely on their identity as part of a marginalized group.

We all have more than one aspect that defines us. For instance, you might be a vegetarian and a bassoonist. 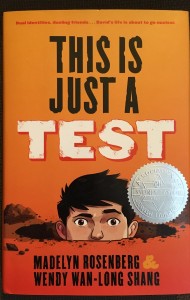 In This Is Just a Test, a companion book to Not Your All-American Girl, one of David’s friends is surprised that he and Lauren are both Chinese-American and Jewish: “You can be Chinese and Buddhist or Chinese and Taoist or Chinese and Jewish.” I managed to stop blathering before I paired being Chinese with every religion on earth.

4. In a way, a playlist is like a time capsule. Create a musical playlist for the 1980s. If you’d like, have your parents or guardians help. (For reference, here’s a playlist that Madelyn and Wendy made in honor of the book.) Make another playlist of songs you like right now.

5. And finally, because we’re all spending too much time inside, if you own a hula hoop, get it out and see how long you can keep it going. Can you sing and hula hoop at the same time? 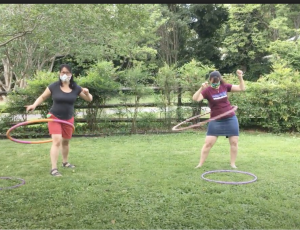