To Catch a Frog

As some of you may know, I’ve spent the last few weeks searching for a frog to use in a trailer for How to Behave at a Tea Party, my book with illustrator Heather Ross that comes out this September.

Frogs (well, one frog in particular) play a role in our book — a role that Heather amplified even more when she did the illustrations. 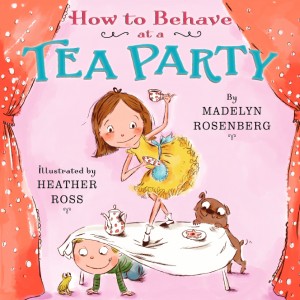 I spent a lot of my childhood catching frogs, toads, and other wildlife in Blacksburg, Va., where a creek near our house served as our rec room.

We live outside of D.C. now, and my own kids haven’t had as many opportunities to troll creeks for wildlife, to learn how to pluck a crayfish out of the water by grabbing him just behind the claws. But they did grow up knowing the low, did-someone-just-start-a-lawnmower sound of the bullfrog. That’s because we have a backyard pond, installed by the obsessive gardeners who owned our house before we moved in. When you turn on the waterfall, it drowns out the sound of nearby 66. 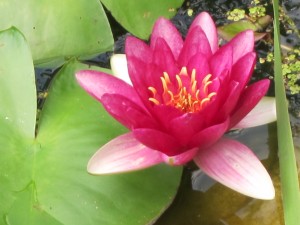 There had never been a huge number of frogs in the pond, only a few. And they turned out to be a great delicacy for the raccoons who visited our neighborhood. Over our years in this house, our frog population diminished, then disappeared. Last summer and this summer, the pond has been quiet, populated only by waterlilies, snails and dragonflies, none of whom say very much.

Heather has tons of Frog Experience — more than I do. Her book How to Catch a Frog, a compilation of essays on DIY, growing up and being a grown-up, takes its title from a story about her heroic attempt to save frogs  — her frogs — from Vermont dinner plates. The fabrics that she’s created over the years have featured frogs as well, as in the accompanying swatch. 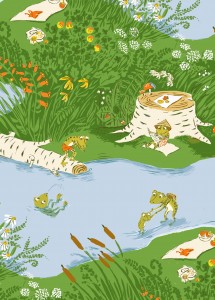 This is probably a long way of saying that we really needed a frog for our book trailer. A live frog. Only I couldn’t drive north to get one from Heather. And I didn’t want to buy one from a pet store; that seemed wrong for what would amount to a cameo appearance. I put out a Facebook call to try to borrow one. I got a few offers of snakes, but that was about it. So I set out to do what I would have done when I was 9: I set out to catch a frog.

I started at a local spot along the Potomac where I’d seen frogs on every excursion — every excursion but the one I made myself, without my family, with the soul purpose of borrowing a frog for 4 seconds of internet glory. I tried a second spot where I’d seen frogs while hiking, but no dice there, either. I sat outside of our own pond again, just in case the raccoons had missed somebody. A friend suggested I contact the local nature center, but I didn’t think they were in the habit of loaning out amphibians, even if I promised no frogs would be harmed during the making of our video. I found tadpoles on Craigslist, but they wouldn’t grow arms and legs or lose their tails by our book’s release date. And I checked an exotic grocery store in case I could, like Heather, save a frog from a dinner plate. All I found was abalone.

Then Wendy Shang told me that a member of her son’s Boy Scout troop had a pond near his family’s house in more-rural McLean. The pond was full of frogs and Chrissy Brownson (the mom of said scout) was an elementary school teacher. As such, she was willing to do pretty much anything to support someone who worked on books that her students might someday read. Her boys would be glad to help us find a frog.

My definition of friendship changes each month. Right now it goes as follows: A true friend is someone who helps you find a frog, even after you’ve given up looking.

On Thursday, the kids and I drove out to McLean where we met up with Wendy and her kids and Chrissy and her kids. Right away, we could hear the frogs. The water rippled with them. But they proved tricky to catch, even with a small kayak and a net. 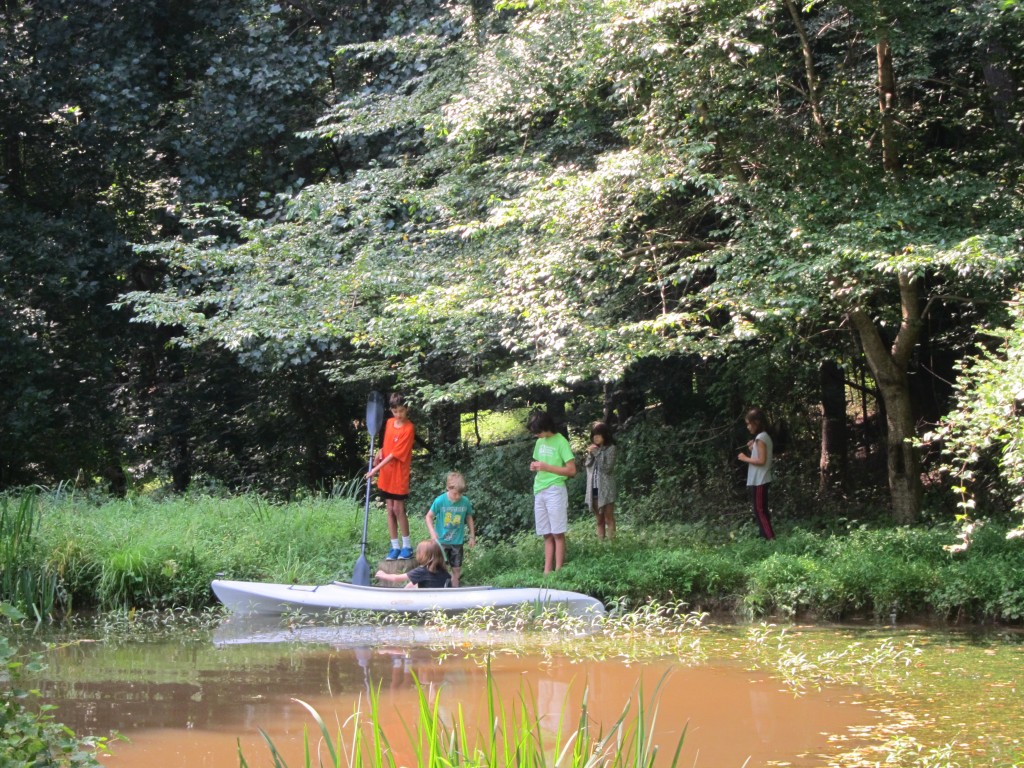 The kids on the hunt.

No one was ready to quit (the fun is in the search, after all), but as the light began to change, we sent the kids back up  the hill to check on a family of toads hiding out in a window well. A toad, we thought, could be the emergency stunt double; the understudy. When the kids came running back through the tall grass, they had not just one toad, but four of them, along with a spotted salamander and the most patient, photogenic frog we will ever meet. 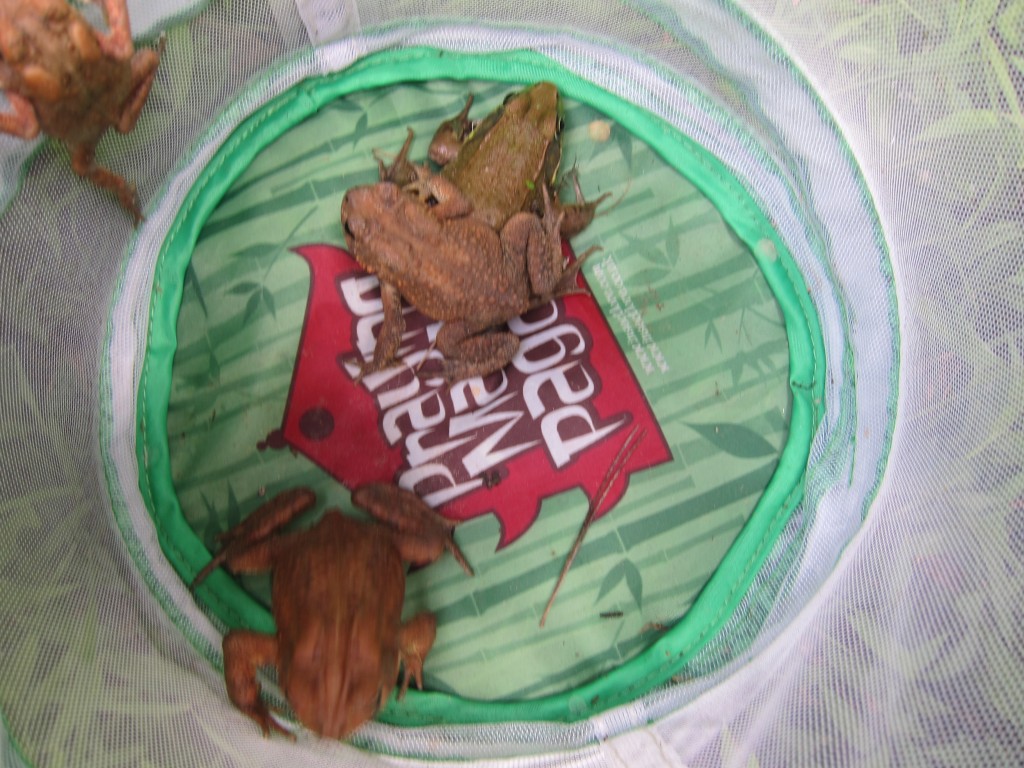 We shot the video with a toad, first, because he was dry and easier to hold onto. 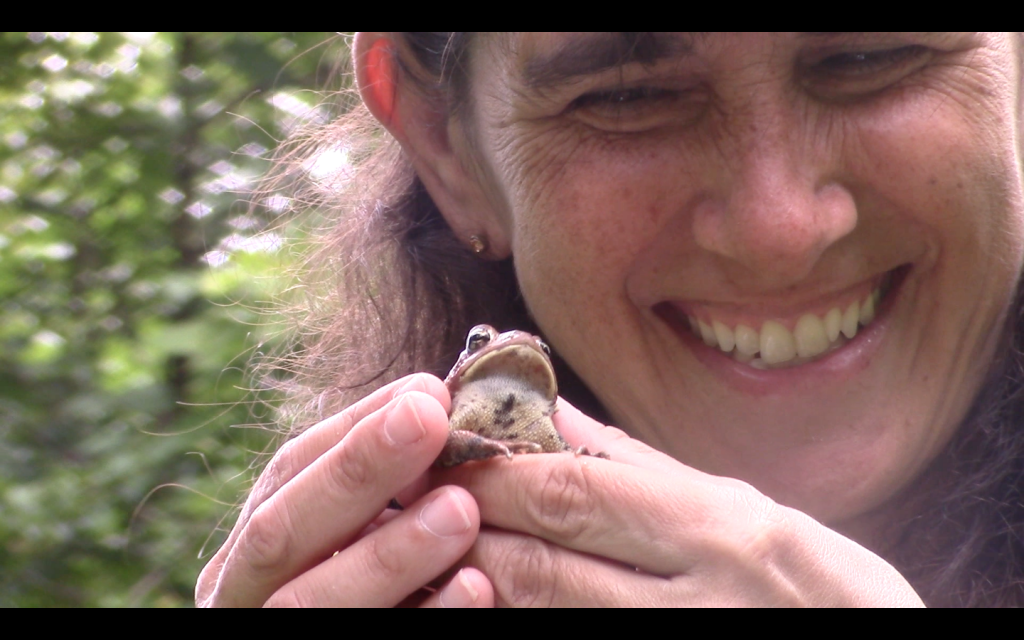 Me with Toad, and pretty much every wrinkle showing...

It was trickier with the frog, who slid through my fingers three times before resting quietly in a tea cup for his close-up. 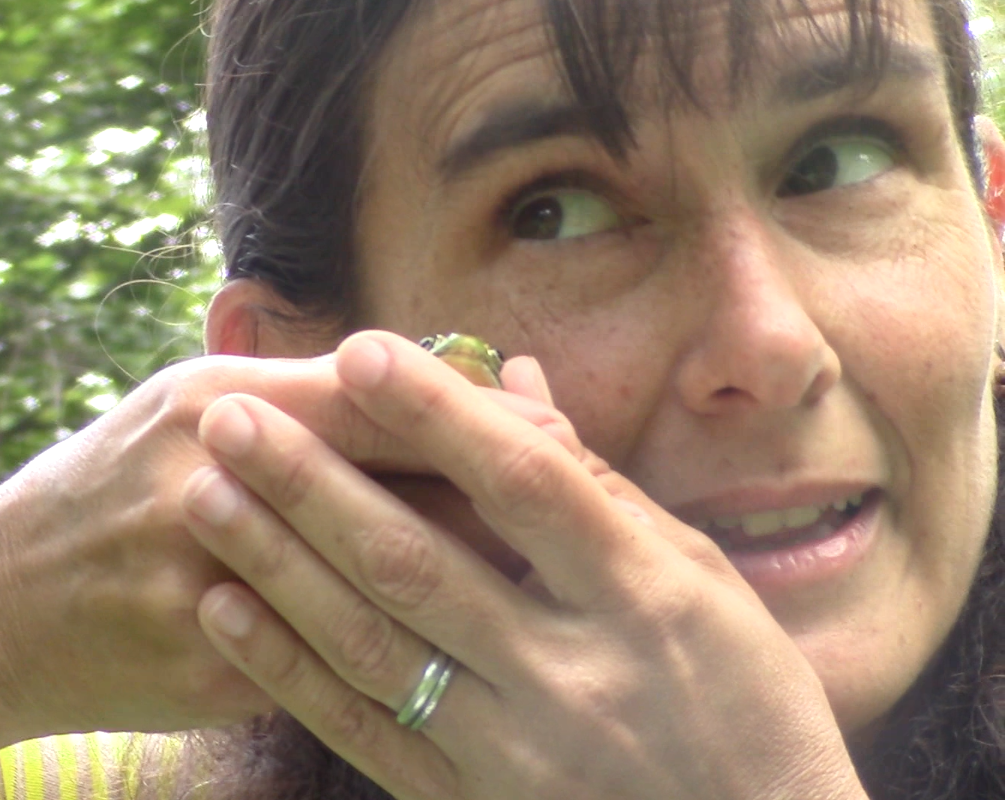 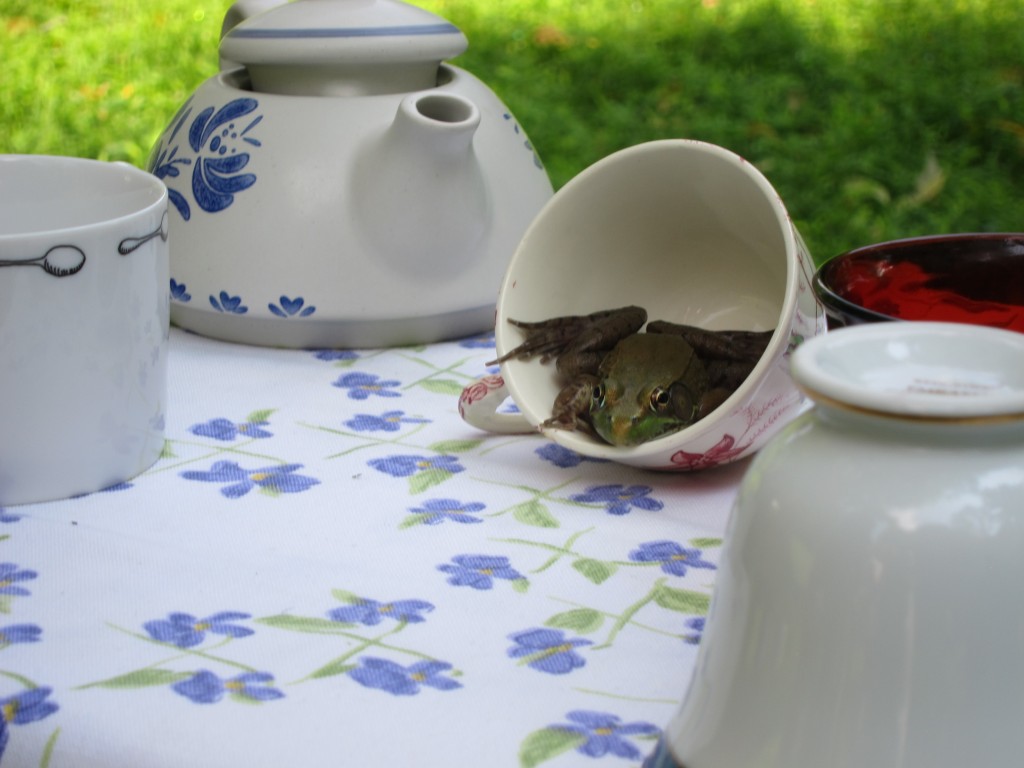 When we were done, we let him go near the water’s edge. 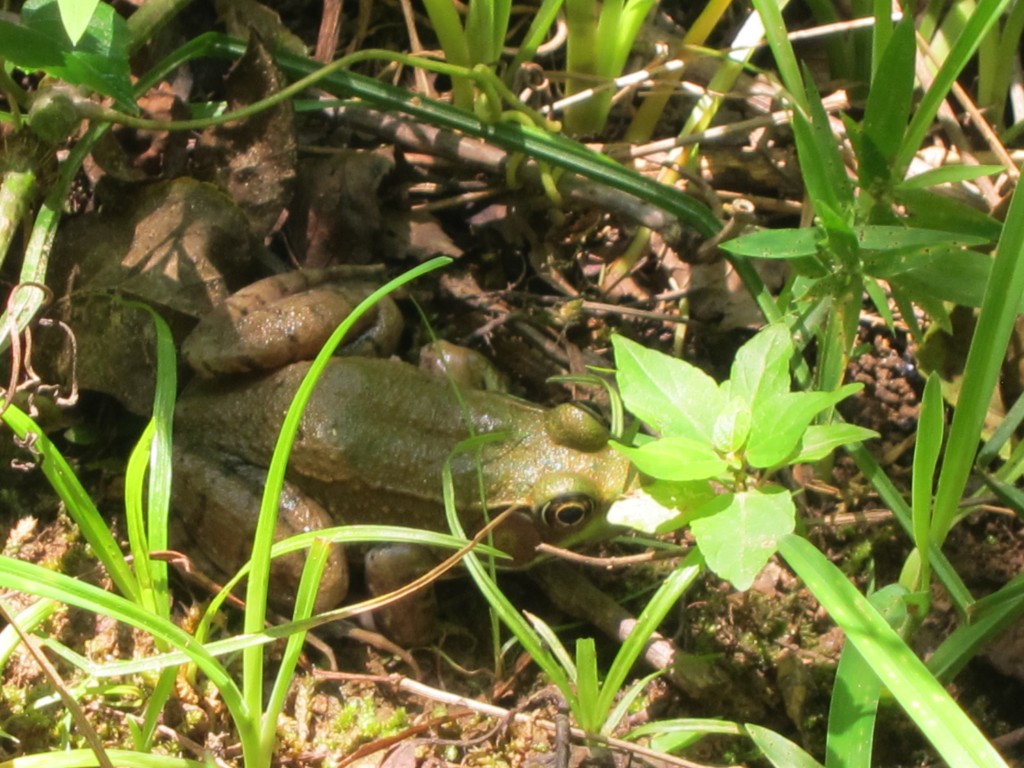 We set the toads free along the hillside. They seemed happy there. My kids were happy, too. They claimed it was one of the best days of summer.

When we got home my son went into the backyard. He came running into the house a minute later with an announcement: A small creature, startled by his bare footsteps, had just leapt off a rock and plunked into the pond.  Our own frogs were back.

7 Responses to To Catch a Frog