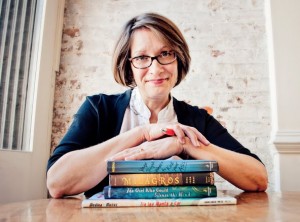 It is hard to talk about Meg Medina without gushing. She’s generous, wicked smart, and the kind of electric that makes you think that it might make sense to keep a drier sheet in your pocket, just in case of shocks. She started Girls of Summer with Gigi Amateau to emphasize strong female characters in fiction. Her own strong character, Piddy, is at the center of last year’s Yaqui Delgado Wants to Kick Your Ass, which earned Meg a Pura Belpré award. And CNN recently named Meg as one of its 10 Visionary Women. Plus, she’s  one of the Olympians who jumps genres in her writing, penning, among others: The Girl Who Could Silence the Wind, a YA, and the picture book Tía Isa Wants a Car, illustrated by Claudio Muñoz. She was kind enough to answer some questions between deadlines.

Which came first: Chicken or egg, picture book or novel?

What was the first thing you published? (And yes, I mean EVER.)

Ever?  A poem for adults. My first published piece was titled Bella Lechuga, a woman’s name that translates literally to Beautiful Lettuce in Spanish. After that, I wrote short stories and essays, and I usually got “paid” in copies.

When did you publish something in a different form?

Almost from the start, but I started writing a middle grade novel in 2005. Eventually, it became MILAGROS: GIRL FROM AWAY (Henry Holt 2008, click here to learn about the ebook.)

Are you a one-project-at-a-time person, or do you mix it up? How easy to you find it to go back and forth between different forms?

I am usually a one-project-at-a-time person, at least for drafting. I get so involved in the voice of the narrator

that I have trouble even re-entering real life. However, once you start publishing, you have projects at different stages of completion. You don’t have much choice about dabbling in more than one project when things are moving through production. So, for example, this week I was working on a rough draft of a YA novel when copyedits came through for a picture book. It gave me whiplash.

Regardless of age, I like to write about strong girls, and I like to explore Latino culture in all its varieties.

Speaking of Latino culture: You’ve been a big advocate for diversity in children’s literature, appearing on panels and joining in the dialogue on Facebook and Twitter.  What can parents and young readers do to help solve the lack-of-diversity problem?

The most important thing is to buy books or borrow books from the library that include people of all races and ethnicities. Ultimately, it’s an incredible gift to young people to help them experience stories with all sorts of characters at the helm. It represents their world as it actually is. But equally important is that investing in a multicultural library also means that you help these books flourish.  Publishers and bookstores speak a language called Dollars. If excellent multicultural books move on the shelves, publishers have more reason to publish more of them.

Editor’s note: This past week saw an Internet call to action on this very subject. Visit this site to be a part of it.

What age group do you enjoy writing for the most? If you can’t choose (I know I can’t) let me know what you like/don’t like for each form.

What I LOVE about:

Picture book:  It’s poetic in that it’s a big story told with evocative language and a small word count.

Middle grade:  The mix of brains and innocence that have to go into the characters.

Young adult:  I like exposing the ugly underbelly of growing up. YA is the perfect place for that.

What has writing in one format taught you about the other?

That you have to respect what the reader is able to bring to the story in terms of their development.

Is there a genre you’d like to try that you haven’t tried yet?

You know, I’ve always wanted to write something funny. I love to laugh, and I love the sound of kids laughing. I’d consider myself really accomplished if I could make somebody snort milk out of their nose.

Is there a language you’d like to publish in that you haven’t yet?

So far, it’s only been Spanish and English – and only for Tía Isa Wants a Car. I’d be satisfied with having all my books available in those two languages so that Latino families could enjoy the stories together, regardless of how fluent anybody is in English.

Other than that…it might be cool to hear “Yaqui Delgado Wants to Kick Your Ass” in Chinese.

Editor’s note: I asked my friend Laura if she could make a recording of the title in Chinese so Meg could hear what it sounded like. Laura’s husband, Ximin Fang, is actually the one doing the talking here. They say this is a “loose translation”:

You can find out more about Meg at her web site, megmedina.com, or follow her on twitter at @megmedina.