In Dream Boy, Martin has his first experience with French Toast. Spoiler alert: He likes it. A lot. Which serves as a good reminder to the rest of us that it’s okay to eat French Toast any time of day. If your reading group takes on Dream Boy, French Toast pretty much has to be on the menu.

I have more experience with French Toast than Martin does, so I thought I’d offer up the following:

Hint No. 1: The bread: Though you can make just about any leftover bread taste good, I prefer to use challah, leftover from a Friday night shabbat dinner. (Really, we need more than leftovers so sometimes I buy or make two challahs. Thinking ahead!)

Hint No. 2: This is the one I keep saying I’m going to send to Heloise, but I haven’t: I often slice down one of the challahs and throw it in the freezer. That way, when I dip the bread in milk for the recipe, it doesn’t get too soggy or rip or crumble before I get it in the pan. The same trick works when you’re making peanut butter sandwiches. (Spread PB on frozen bread. Pack lunch box. It will thaw in plenty of time.)

My recipe is pretty basic:
Scramble an egg on one bowl/plate (I prefer using the oval dishes that you’d normally fine in Chinese restaurants.)
Pour some milk in another.
Heat a frying pan with a tablespoon of oil (you’ll be adding as you cook) and set on a medium heat.
The order goes: Soak bread in milk. Flip. Then dip in egg. Flip. Put in frying pan. Sprinkle cinnamon on the side that’s facing up. After a minute or so, flip toast and sprinkle the other side with cinnamon. Keep flipping until golden brown.
Toppings: Strawberries, blackberries, honey or syrup. 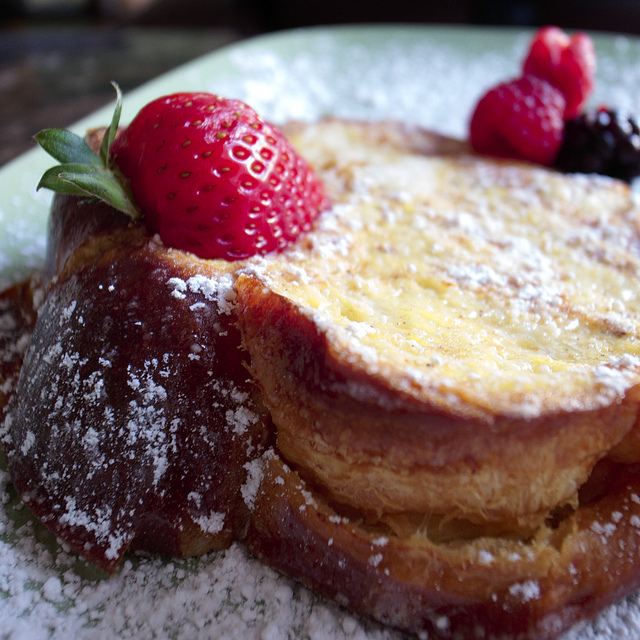 This entry was posted in Dream Boy, family, recipes. Bookmark the permalink.