Molly Burnham talks about punk, kidlit, and her first novel 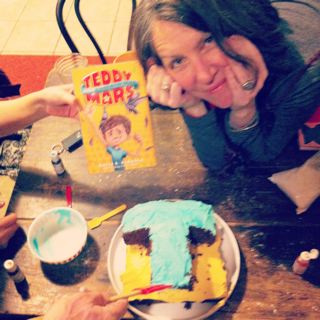 Molly B. Burnham’s debut middle-grade novel, Teddy Mars Book #1: Almost a World Record Breaker, comes out next week. It’s about record-obsessed Teddy, who is navigating his way through school and his crazy family, which includes his little brother aka The Destructor. It’s also about pigeons; lots and lots of pigeons.

I met Molly and her fabulous writing the same morning about 15 years ago through a critique group set up by SCBWI, which turned out to be a better matchmaker than either Yenta or Date Lab.

When my Tea Party book and Teddy (which will ultimately be a series) both ended up at Katherine Tegen Books, I told everyone we were label-mates, as if we were rock stars, which Molly totally is. I’m talking about as a human being, though she was also a part of the DC punk scene, where she hung out with the Dischord crowd. When I see her picture pop up somewhere, like Banned in D.C., I get a warm, glowy feeling. Which is why the first question I had for Molly was:

Me: How did punk rock affect your approach to writing?

Molly: It affects everything I do. I got into punk when I was 13/14 (I’ve never been terrific with dates and there was a lot of stuff going on but it was in that region). Punk was about D.I.Y, finding your own way of doing the things you were passionate about, not following anyone else’s path, standing up for things that you believed in, and ultimately about believing in your own creativity and that you had something to say and that that was worth hearing. Growing up in DC, we were a very political punk scene, too. We believed in being active and taking action. We were able to go to protests on the mall, or in front of the South African embassy. I consider us very lucky for that.

Ultimately, I believe in taking part in life, having a voice, and using it, particularly in equity issues. We all really need to stand together to make change. Saying all this, I also come from a family of journalists, and this sort of thinking is found in them as strongly as it is in punk. It just presents itself in a different way.

So how does it affect my writing? I think it gives me permission to have very few rules. I write when I want. I don’t have a certain number of words or pages. I doodle, I pace, I walk, I write. Sometimes I wake up really early to write, sometimes I write late at night (although not often —usually by night I feel pretty done with language).

I approach my writing like it’s a punk show that I’m excited to go to. A lot of people talk about the struggles in writing. I deeply respect what they say, but it’s not that way for me. There are other folks who have real struggles —struggles with illness, poverty, war. Every day when I sit down, I remind myself about how awesome it is to write. It’s not always easy, but it’s awesome. This is like a punk show. They were not always easy (especially if you got a boot in your leg) but they were always awesome.

Lastly, I want to say that although I did listen to music in the classic punk genre, I was also drawn to any music or arts that had that punk spirit. The bravery, rawness and truth that I feel is the essence of punk rock can be found in many genres and many art forms. 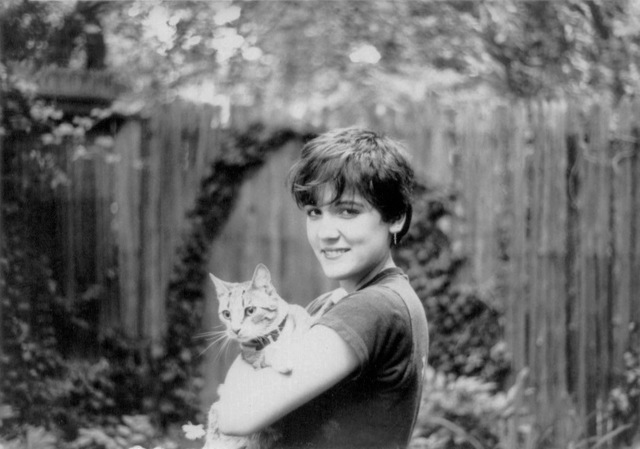 Molly in her teens.

Me: Tell us what’s punk about Teddy Mars.

Molly: What isn’t punk about him? He doesn’t really care what people think of him. At first glance he is independent and does his own thing, but deep down he’s actually very community orientated. Also he loves pigeons and they are a very punk bird.

Me: In your book, Teddy wants to stand out – something I think we relate to both as kids and adults. Did you ever go through a phase like that?

Molly: I didn’t know at first that that was going to be Teddy’s ‘big deal’. I came to know it as I wrote the book. I think my own kids helped me to notice this feeling because they would have/still have these feelings — ‘you don’t really see me.’ Experiencing them going through these emotions reminded me of those exact feelings in my family (and like my kids there were only two of us!) I also have friends who are from huge families and they tell the same story. We all want to be seen. It feels like the oldest shtick in the book — wanting to be seen, to really be understood.

Me: Were there any world records you wanted to break?

Molly: I remember thumbing through those Guinness World Record books and being especially impressed by the World’s Longest Fingernails. (As a nail-biter, I didn’t have a prayer.)

I don’t remember actually coming up with one record I wanted to break. When we were kids the photos were in black and white, and of course we stared at the photos a lot. But the book didn’t take pictures of things that I thought I could break. They took pictures of fingernails and tall people. I remember the pictures very clearly. When I was maybe 15 I did try to stuff the most grapes in my mouth. My aunt had a Polaroid photograph of this on her fridge, but I never submitted this to the Guinness folks. I think I got maybe 14 grapes and had to stop. It made my mouth feel claustrophobic.

Me: Because of the ages of your characters, people are bound to make (positive) comparisons between Teddy and the Destructor and Peter Hatcher and Fudge. Have you been hearing that at all?

Molly: I loved Judy Blume when I was growing up, but I didn’t read the Fudge books. I read Are You There God? It’s Me, Margaret, and a number of other titles. Judy Blume was the only author I wrote to as a kid. She (her publishing house?) sent a signed picture of her (wish I still owned that!) It was my editor, Maria Barbo, who pointed me in the direction of them, and when I read them I fell off my chair. I felt like such a phony, such a copy cat. I felt like I plagiarized Judy Blume! Honestly I didn’t, but I was gobsmacked. Thinking this over though, there are loads of books that deal with these problems. I don’t know what inspired Judy Blume, but I know I was inspired by every sibling relationship I watch, including my sister and me, my own kids, students that I had, as well as friends’ kids. For my book, I just exaggerated. Judy Blume is an inspiration as a writer. She has an outstanding career and takes on topics that are challenging for people (I love that!). Back to your question, I think there are just some universals in the world that Judy Blume and I agree on, and one of those is that having a sibling can be challenging.

Molly: I only have two kids, but sometimes I feel like I have seven, eight or nine. In terms of parenting choices I was inspired by friends who are from large families and how when they talk about their parents they are pretty invisible. Although, I also grew up at a time where parents were less attentive to their kids. This has good points and bad points. I was also inspired by my own kids who are always teaching me to let them be independent. Early on as a parent I was more uptight. I felt like every thing I let them do would send them in a direction; now I actually trust that I don’t need to control them so much, that actually through discussing things do we get to a better place. One thing that was funny about the book was that after my kids read it, they were inspired to move out into a tent in our backyard. (This was because they got mad at me about something). In the end, we made up and they slept in the house. But if they had stayed out there, I wouldn’t have minded.

Me: You went through the writing program at Hamline. I know it’s ridiculous to try to sum up all of the things you took away from that experience, so I’ll settle for two…

Me: It’s the eve of the publication of your first book. Not to be too much of an in-your-face sports announcer, but how does it feel?

Molly: Exciting, of course. Terrifying, of course. And like nothing is going to change because the point for me of this whole thing is to be able to write everyday. To do the thing I love to do: tell stories. It’s like flossing my teeth, just because I do it in the morning doesn’t mean I get to stop doing it for the rest of my life. I do it twice a day for the rest of my life because I really like my teeth.

Me: Talk a little bit about middle-grade, and how that became your sweet spot.

Molly: From 1998-2007 I mostly worked with kids. I was a nanny, and then decided to get my MA in Elementary Education. I went on to teach at a school for kids with behavioral and psychological challenges, and eventually taught Kindergarten and 3rd Grade in a Northampton Public School. I had been writing during all this time, but I was only writing picture books. Being a nanny was when I started to engage with children’s books outside of my own self, it was all about reading them and how the kids responded. This was a terrific education. Then I went into teaching and it’s all thinking how does this book connect to curriculum. You have to stay so open and read so much. At some point I wrote a picture book that was funny and great but way too long. Someone suggested I turn it into a middle grade. I wasn’t sure I could do this because I’d always  written short pieces, but going to Hamline was the perfect place to explore this. What I love about middle grade is the same thing that I love about 3rd grade. The magic of life is still appreciated. Even in the toughest kid, who’s gone through real struggles, at that age, they know so much but they still connect to the magic of this world. Anything is possible in middle grade — for example a kid can move into a tent for almost a whole year! Or try and break world records. There’s a wackiness to them. It’s like watching I Love Lucy. You just believe it.

Me: I know how much you love hearing about other people’s writing process. Could you talk briefly about yours?

Molly: My life is pretty chaotic, and not orderly, and my mantra is: The map is not the terrain. I need to follow my terrain.

Me: And, while you’ve been waiting for this book to come out, I know you’ve been busy writing the second. Do you have a title for that one yet?

Thanks, Molly! You can (as of next week) find Teddy Mars Book #1, Almost a World-Record Breaker at a bookstore near you. You can find Molly online at Mollybburnham.com and on twitter at @mollybburnham. And you can get a taste of Teddy from this cool claymation video: