I first met Rob Lunsford at The Roanoke Times, where he had an office with big, glass windows that looked out over the newsroom. (I just made that sound way more majestic than it actually was.) From that room, he did all types of maps, graphics and illustrations for the newspaper under extremely tight deadlines. While his job did include inking illustrations for children’s stories that ran in serial form in the paper’s back pages, I’m counting his illustrations for Deborah Kalb‘s The President and Me: George Washington and the Magic Hat, as a genre jump.

Me: What were some of your first illustrations?

R: I used to ask folks to draw a letter or number and then I would turn it into a picture, a figure, a face. an animal etc.

For example, a 7 made the perfect start for a left-facing man’s face with a flat-top haircut. 8? Just add a circle on top and go for the snowman. This was probably mid elementary school.

Me: When did you know you wanted to be an artist?

R: I guess it kind of snuck up one me. High school was about over and I needed a plan. Folks had always liked my drawings so I applied to art school

Me: What’s the first piece of art work you got paid for doing?

R: The summer between fifth and sixth grade I wanted money for some mail order deal. I got neighborhood kids to bring me their T-shirts and pay me 25 cents to put Magic Marker drawings on them.

Me: What’s the most recent piece of art work you published that was not a children’s picture book.

R: I still do my share of maps and graphics. As far as illustration,  I recently did a “coloring book” style full-page drawing for the local newspaper. The idea was to pick up on the popularity of grown-up coloring books using local and regional landmarks as images.

Me: Talk a little about the different mediums you use for your illustrations.

R: It started with pen and ink or airbrush. That all changed when the Macintosh with drawing programs came along. It was made for me.

Me: Have you done any other illustration work for children? If so, discuss. 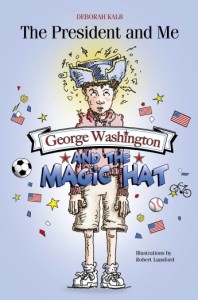 R: When I was still at the newspaper I did illustrations for  a few “Newspaper in Education”  chapter-a-week stories. These projects, like “The President and Me” were designed for a juvenile audience.

While not specifically designed for children, I drew a  few “Night Before Christmas” pages and most recently a Halloween maze page. Probably wasn’t quite complicated enough to call it grown-up so we might could call it a children’s illustration.

Me: Do you have a certain audience you picture when you work on illustrations?

Me: What type of audience do you like working for the best? (Young people, older people, motor cycle gangs, etc.)

Me: Have you depicted George Washington before in your art work? If so, what did he look like? Any images you can share?

R: I’ve drawn plenty of George’s on dollar bills but so far I can’t find one. I’m no stranger to presidents. I did find the attached Lincoln/Grant picture that ran with a story about gifts from $5 to $50 dollars. I think it’s a good example of the presidential caricature style that I enjoy.

R: Courtroom to kids is a good example. Courtroom drawing uses body language, subtle expressions, mannerisms. It’s about being observant. There’s a certain subtle caricature style to it. All of these details make for improving the visual story telling.

Me: Are their any genres you’d like to try that you haven’t tried yet?

R: Coming from a line of carpenters, cabinetmakers and craftspeople I have a calling to do more three-dimensional work. My wife and I have collaborated on a number of carved and painted projects over the years and I’d like to do more.

Thanks, Rob! For more information, visit thepresidentandme.com. For books by friends of mine at The Roanoke Times, visit my pinterest page.

This entry was posted in artist interview, genre jumpers. Bookmark the permalink.