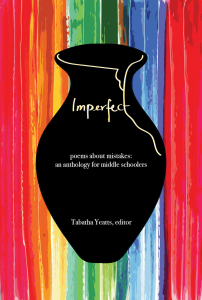 Those of us who grew up on Sesame Street spent a lot of time listening to Big Bird wax poetic about making mistakes. Everyone makes them, he said, why can’t you? But while Big Bird was chill with the idea, it took Maryland poet Tabatha Yeatts a few extra years to buy in. She was especially hard on herself as a teen, she writes in Imperfect: poems about mistakes, an anthology for middle schoolers. She didn’t want to make them. Looking back now, she has a different understanding and perspective. And she doesn’t want teens, including her own, to feel the way she did. Her book, which includes some of her own poems along with poems by Margarita Engle, Liz Garton Scanlon, April Halprin Wayland and many others, analyzes imperfection and at times, celebrates it. The book is out today, in time for National Poetry Month.

Tabatha and I are from the same hometown, so I thought I’d interview her to give her The Blacksburg Bump. (If I say that’s a thing does that make it a thing?)

Me: I can guess the answer to this, but why did you focus on middle school for this anthology?

Tabatha: I feel like every age can benefit from understanding that we’re all imperfect, but middle schoolers seem particularly hard on themselves (and others). Also, when you look at poetry anthologies, you can get the feeling that middle schoolers are a bit left out. It’s nice to say, “Hey, I see you and you’re okay!”

Me: What were you like as a middle school kid?

Tabatha: Me? I think I was pretty scared of doing the wrong thing all the time, so I didn’t feel like I had room for making mistakes. And I was pretty sure other people didn’t make mistakes!

Me: What was the first poem you knew was going into this anthology? How did you choose the others?

Tabatha: I told Margarita Engle about my idea for the anthology and she gave me her poem, so that was the first one. It was such a show of faith in my plan that I figured I had better go through with it!

Actually, there was a poem that was around before that, “What Goes Wrong,” which I wrote after I heard that people make mistakes every hour. Every hour?! I had been surprised because I would have guessed mistakes were made much more infrequently. It made me think about the difficulty of being the president, or a brain surgeon, or anyone else whose mistakes can have big ramifications. And then I started wondering about small mistakes, the kind that we don’t really notice. I would say that the entire anthology started with those ponderings.

A selection committee went over the poetry submissions to help determine what was included. I am so grateful for their input! One of the committee members is a teacher and she told me when she turned in her results that she had done the entire thing with her son, and they had discussed and debated them until they had one score to turn in for each poem. She said it had been a wonderful project for them to do together. I loved that! 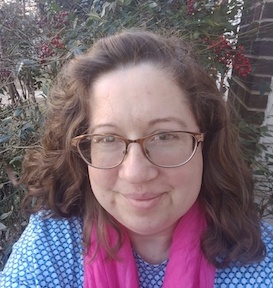 Me: Did being a parent have anything to do with your drive to create this anthology?

Tabatha: I would say yes, being a parent did contribute to my desire to make this happen. Not only for my kids, but for their friends. My kids’ high schools are pressure cookers. When my son was in elementary school, he related a story of one of his classmates getting a 98 on a paper and his parents asking, “Where did those two points go?”

Me: Talk a little about the variety of forms of poetry included here.

Me: Your back matter includes how to create certain poem forms, which I expected, and some wisdom on making good decisions and apologizing effectively, which I didn’t. Could you talk a little about the back matter you chose to include and why?

Tabatha: It occurred to me that when we are thinking about mistakes, we want to figure out how NOT to make them, which is why I included the part about making good decisions. Some mistakes you can see coming, if you look. Equally important is what to do after you’ve made a mistake, hence the section about apologizing. It’s a fundamental life skill that I’m not sure gets talked about to kids much at all.

Me: Did you make any mistakes putting together this anthology?

Did I make any mistakes? But of course! As the formatter and I went back and forth (and back and forth etc etc), I wondered, “Is it ironic that I am desperately trying to keep mistakes out of this book??”

Me: What is your hope for this collection?
Tabatha: One of the things that I hoped to do with the selection of poems was to not only appeal to different middle schoolers who might or might not have a lot of experience with poetry, but also to appeal to the same middle schooler at different times. Looking for a laugh, or someone to commiserate with? Things could change by the hour!

Me: What gave you the courage/gumption to take on this project yourself?

Tabatha: I have done a lot of volunteer work in the schools and when I do it, I think about the individual kids who might benefit. I have always felt like if one person was helped by something I did, it was worth doing. I feel the same way about IMPERFECT. It’s really from my heart to yours, mysterious mistake-making friend. It’s for you.

Me: When I visit schools, I’ve had some kids tell me that they aren’t good writers. I’ve been trying to get them to think of one part of their writing that IS amazing — break it down so it’s not so scary or daunting. Maybe they are great at writing about gross stuff. Or maybe they’re great at dialogue or naming characters or finding just the right word to describe a blueberry pie. So I thought I’d start asking writers, too: What is your writing super power?

Tabatha: Mine is Click-Writing…I can circle around a topic and circle around it until I figure out how I want to approach it. Then when I finally get that figured out, CLICK! It all comes out.

For more about Tabatha and the anthology, visit the Team Imperfect Blog. You can find Imperfect online at Amazon, Barnes and Noble, and Powell’s.

This entry was posted in author interview, poetry, Poetry Friday. Bookmark the permalink.