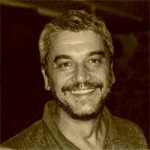 Welcome to my virtual living room. Today’s guest, Alexi Natchev, doesn’t spend a whole lot of time sitting on couches, virtual or otherwise. For the past few weeks, the Bulgarian-born artist and professor has spent his waking hours preparing for a solo exhibit at the Delaware Art Museum. The exhibit, entitled Imagined Places: The Art of Alexi Natchev, features more than 40 of Natchev’s illustrations. A hand-colored relief print of the seder scene from The Elijah Door, A Passover Tale, which just received the Sydney Taylor Honor Award for Younger Readers, is  included. Alexi took brief timeout from his preparations this week to talk by phone about the book, which was written by Linda Leopold Strauss.

The Elijah Door (Holiday House, 2012) tells the tale of neighboring families who share their Passover seders for years, until the death of two geese and an insult halt their friendship. Can their children and a clever rabbi find a way to bridge the gap? 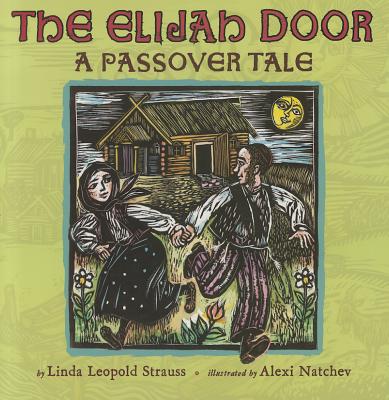 Me: Please talk a little bit about the way you went about creating the art for this book.

Alexi: The initial idea about the art work came from the text. There is a mention of a geographic region somewhere between Russia, Poland and Ukraine. In this part of the world as well as in other European countries there is a tradition of so-called “popular prints” from the 18th and 19th century that are a reflection of every day life of the people — of country life. They are, in a way, folk art with a charming, primitive feel. They sold these prints at the Sunday markets and people used them for their home decoration. They were block prints, but they colored them with egg dyes — not even with brushes, but with pieces of rag. It’s called lubok, and that was, I thought, very appropriate to the character of the folk tale. I offered this line of work to the editors and the art director at Holiday House. They embraced the idea.

Me: Had you tried it before?

Alexi: I had done this many, many, many years ago. I didn’t know clearly what I was getting into — it turned into a three-years project. It was a lot of work. I used wood blocks and then I had to hand color them in the same tradition. But it was really a great experience for me. I think I was able to convey the spirit of the story. And the images — you cannot imitate this type of graphic power with anything else. The energy of the stroke — the energy of the physical effort — is translated into the image. It gives it a unique texture. The physical aspects of the work add to the power of the image.

Me: You managed to get so much detail in the facial expressions. I especially like the eyes. It is hard to believe that it all came out of a carving.

Alexi: That is the work of the artist to be able to bring individuality to each of the characters — to make them in flesh and blood, to give them pulse and breath. Humor participates in the story and makes things more understandable.  In a way this is the story we can see in every culture … families, generations, and then happy endings. 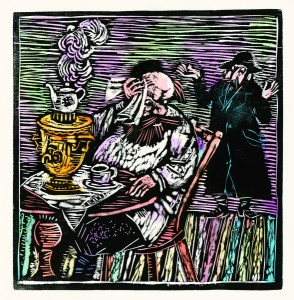 "What about my geese?" Artwork by Alexi Natchev from the Elijah Door (Holiday House)

Me: Which image took the longest?

Alexi: The multi-figural compositions, where we had the big seder scene and the landscape at the end. They are bigger in size, but I also wanted each figure to be individualized and placed in the right place with the right facial expression and to have a variety of types of people. Old ones. Children. Young people. It is really a long process — time consuming. You need to stay with the same enthusiasm and focus throughout the entire process of creating the book.

Me: Are you the sort of artist who immerses himself completely in one work, or do you have several projects going at once?

Alexi: I really immerse myself in the current project I’m working on. You have to live with your characters. When I was doing this book, The Elijah Door, I couldn’t do anything else. You’re immersing yourself and you’re learning from the process every day.

Me: What was the best part or working on this project?

Alexi: The best part was at the end when I saw all of the prints in black and white. I was pleased that they were a cohesive series, stylistically unified, but at the same time each image … was telling a story. I was doing the hand coloring, and that was a pleasure moment. It was enhancing the existing image, and most of the work was already done.

Me: As a child in Bulgaria, did you spend a lot of time reading? Were folk tales a part of that?

Alexi: Absolutely. My love for illustration started exactly at that age before seeing any television. The book was my window to the world that I was dreaming of. The book gives me the type of experiences I was missing in my real life: to participate in some risky adventures, to see the world’s exotic places with strange names. I was a young boy imagining sailing oceans, being on other continents. The folk tales were a big part of our culture. I was reading a lot of Bulgarian folk tales and folk tales from other countries. That maybe sparked my interest in illustration. And in my artistic education, illustration was really not just for children. In my formative years, art was part of the idealogical system. We were living at that time on the other side of the Iron Curtain so everything was very idealogical and politicized. But in the illustration field you could be a little more creative, not so rigidly following certain requirements of clichés and artistic concepts with which you didn’t necessarily always agree.

Me: Did you have a favorite folk tale?

Alexi: I cannot say I had a single favorite. But I really think that if we have great literature, it is for every age. One of the tales I have read and read over and over again is not necessarily a folk tale, but the story The Little Prince (Le Petit Prince) by Antoine de Saint-Exupéry. It is one of my favorite stories. At 4 years old you can understand it and at 90 years, you can appreciate it.

Me: Aside from your solo exhibition (Alexi notes that the opening reception, March 3, coincidentally coincides with Liberation Day in Bulgaria) what else are you working on? Any books?

Alexi:  I’m not currently working on another book. It is interesting, I had my first book published here the first year I came to this country, 20 years ago, without knowing too much about the publishing business. I had years where I had three  books published in the same year. But the book publishing business is changing. Publishers are getting bigger but smaller in number. The interest is going to other forms of interaction with the text. The phenomena of reading will stay but with a new format. Whether I will have place in this process I don’t know. I imagine we will see more moving images in the future, in these devices. The distinction between illustration, animation and graphic design will be even more blurred, which probably is normal and good, but I’m afraid that children don’t read as much as they should in the years that they really form their perceptions. And now there are other vehicles of forming imagination and imagery that probably are more attractive because of the moving and dynamic image.

But I like the still image because we may really look and discover details and think about more sophisticated means of expression that you cannot see when you have a moving image. Things like texture, the luminosity of the wash, the richness of the color relationship in a field or form or shape.

Me: What is your favorite medium?

Alexi: For books, I try to use different media and techniques because I think each text has an individual feel and requires a different look and mood. Primarily I work with water-based media or a combination of several media like line and wash or water color and color pencils. I wouldn’t say I have a favorite.

Me: Where do you do your work?

Alexi: I have a studio that is part of my house, but is, in a way, separate. It has good, natural light and high ceilings. I have all of my reference books, all of my supplies. It is my territory.

Me: What do you tell your students about illustration?

Alexi: We are visual communicators. Using fine art, we are telling a story, relaying a message, visualizing a concept. Nowadays the digital technology is part of our vocabulary.

Me: Do you use digital technology much?

Alexi: No. I am the old school. But [whatever the technology] the goal is not much different: you still have to visualize, in a powerful way, your ideas and your narrative. 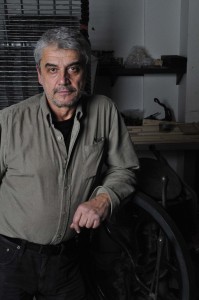 Me: When I was afraid that Alexi would be too overwhelmed by his exhibit preparations to talk, I asked the book’s author, Linda Leopold Strauss, about her reaction when she first saw the artwork for The Elijah Door.

Linda: I was thrilled — blown away.  I think almost every picture book writer has ideas of what the illustrations for her book should look like, and she hopes that the illustrator will see the story her way. For me, THE ELIJAH DOOR story began with an image in my head of Seder tables spilling out of two front doors and meeting in the middle.  Long tables, with LOTS of people.  The actual plot of the story developed from that image, so it was really important  to me that that particular illustration be just right.  And because of my strong association of Passover with my Eastern European grandparents, the Eastern European look of the pictures was also very important to me.  And Alexi captured it all!

Me: Do you have a favorite image?

Linda: I think my “first favorite” is the two-page spread of the seder scene.  The detail in that woodcut is astonishing , and it’s remarkable to me how Alexi managed, in that very difficult medium, to make the story characters recognizable, to include holiday detail, and to add so much humor and humanity to the illustration. I also love the illustration of Mama Lippa hanging her family’s holiday clothes on the line to air — how Alexi has captured the wind blowing the clothes.  And the picture of the mother and the children sleeping over their plates at the end of the Seder, which reminds me of how sleepy I used to get as a child at the end of our very long Seders.

Linda is officially spending the day with Shannon Hitchcock over at  Pen and Prose, so please be sure to follow her over there. Many thanks to the author for popping in here, too. And a humongous thanks to Alexi Natchev for making the time to talk during such a crazy, stressful work week.

If you’d like to see Alexi Natchev’s wood block prints in person, they’re on display through March 31st at Hebrew Union College. Virtually, you can them posted on his  web site. And of course you can see them, beautifully rendered, in The Elijah Door.

For more information on great Jewish books, visit the Association of Jewish Libraries, especially the official Sydney Taylor Book Awards page. The blog tour wraps up tomorrow at The Whole Megillah, and the whole tour schedule can be found here.

4 Responses to Interview with Alexi Natchev